Use the table below as a guide to choosing the cleavage enzyme that matches your affinity purification scheme:

Discover our Cleavage Enzyme. Click on the cleavage enzymes below to get more information: 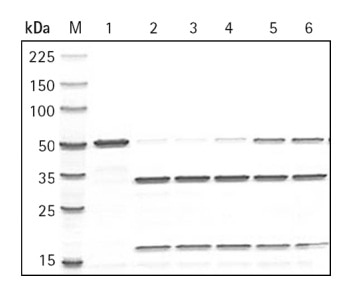 Factor Xa is an endopeptidase that cleaves proteins at the sequence Ile-(Glu or Asp)-Gly-Arg-X, where X is any amino acid other than proline or arginine. Factor Xa cleaves at the C-terminal end of the Arg residue, and is frequently used to remove polyhistidine tags during protein affinity purification on nickel columns.

The Factor Xa Cleavage Capture Kit is designed for highly specific cleavage of fusion proteins followed by convenient affinity-based capture and removal of Factor Xa. After cleavage of the target protein, Factor Xa is removed with greater than 99% efficiency from the reaction by affinity capture on Xarrest™ Agarose. Restriction Grade Factor Xa is a highly purified preparation isolated from bovine plasma and activated with Russell's viper venom. This preparation is purified to near homogeneity and shows no secondary cleavage from contaminating proteases.

Enterokinase specifically cleaves proteins at the specific sequence, Asp-Asp-Asp-Asp-Lys-X, with X being any amino acid other than proline, at the C-terminal end of the lysine. Since this sequence is included in the widely used FLAG affinity tag, Enterokinase is a commonly used enzyme for protein affinity purification.

Recombinant Enterokinase (rEK) is a highly purified preparation of the catalytic subunit of bovine enterokinase, a serine protease which recognizes the identical cleavage site as the native enzyme and has similar enzymatic activity.

Biotinylated Thrombin cleavage with respect to amount of thrombin added. The indicated amounts of biotinylated thrombin were used to cleave 2 μg of Cleavage Control Protein in an overnight digestion. Samples were analyzed by SDS-PAGE (4-20% gradient gel) followed by staining with Coomassie blue. The 0.0045-unit lane represents a 2.25-fold overdigestion.

Restriction Grade Thrombin is qualified to specifically cleave target proteins containing the recognition sequence LeuValProArg↓GlySer. The preparation is functionally tested for activity with fusion proteins and is free of detectable contaminating proteases. Thrombin is supplied with 10X Thrombin Cleavage Buffer and a Cleavage Control Protein.

Biotinylated Thrombin is identical in activity to Restriction Grade Thrombin, but has covalently attached biotin for easy removal of the enzyme from cleavage reactions using immobilized streptavidin. Our Thrombin Cleavage Capture Kit not only includes biotinylated thrombin and immobilized streptavidin but also all required buffers and filters for complete, convenient recovery of cleaved protein.